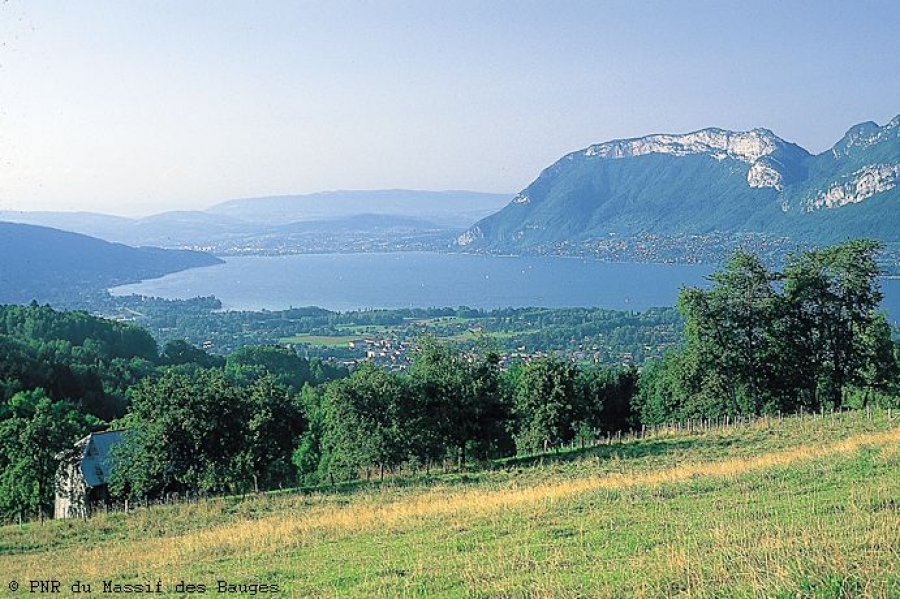 The Massif des Bauges, natural regional park since 1995, covers between 250 and 2217m and an area of 856 km². The park is divided in the two departments Savoy (46 municipalities) and the Haute-Savoie (18 municipalities). The 64 municipalities in the Park hosts 70 000 inhabitants (in 2008) and are part of the department Rhône-Alpes. There are six towns, which are also members of the Parks joint union, and in total 400 000 people are living in the park.

A wide variety of natural habitats

Forest covers 58% of the parks territory and provides the resource wood which is very important for the local economy. Grasslands, which are represented in 30 % in the parks area, are split in hayfields and pastures.

A more detailed analysis of the habitats shows a wide variety, which includes dry grassland in the south-west, wetlands in the lower valleys and rock and scree habitats in the highlands. An exemplar of this diversity is maintained through the Parks’ NATURA 2000 network (7 areas cover 17 000 ha).

Thanks to the landscape diversity, there is also a rich flora diversity to find in the park. 1600 species were identified in the Parks territory, which means a 1/5 of the French flora. Some of them are strictly protected like the lady’s-slipper orchid (Cypripedium calceolus) and the Alpine Sea Holly (Eryngium alpinu). Next to the flora, the fauna is also very varied. The Park observed 117 species nesting in the territory, including many endangered species: golden eagle (Aquila chrysaetos), Peregrine Falcon (Falco peregrinus) and the Black Grouse (Tetrao tetrix). A study of the National Office for Hunting and Wildlife (ONCFS) found out that the chamois is the most symbolic large mammals of the park. In the core area of the natural regional park, the reserve of national hunting and wildlife of the Bauges, the chamois, mountain sheep, grouse and many other animals are protected in a territory of 5200 ha forest and alpine meadows. Since 2003 the park is managing this part of the region in collaboration with the National Forest and National Office for Hunting and Wildlife.

The missions of the Park

For a better way to accommodate the public and the same moment to preserve and reveal the heritage and landscapes while contributing to a sustainable development of this exceptional area, which is surrounded by six cities, the Park developed a charter. The charta includes the following main axes and the working program:

GEOPARK, a label given by the UNESCO

In September 2011, the natural regional park Massif des Bauges got the label Geopark . The global network of Geoparks aims to promote the Earth heritage, especially the geological one, to the public, and to support the local sustainable development of territories in form of geotourism. Nowadays there are 50 Geoparks in Europe – 4 of them in France.
On international level the park develops partnerships with the Luberon Geopark (France) and the Geopark d’Arouca (Portugal) concerning a sustainable resource tourism , which is financed by the European LEADER program. Another convention was signed with the Geopark de Leye Fengshan (as well for tourism projects) and the Altai Mountains in Russia.