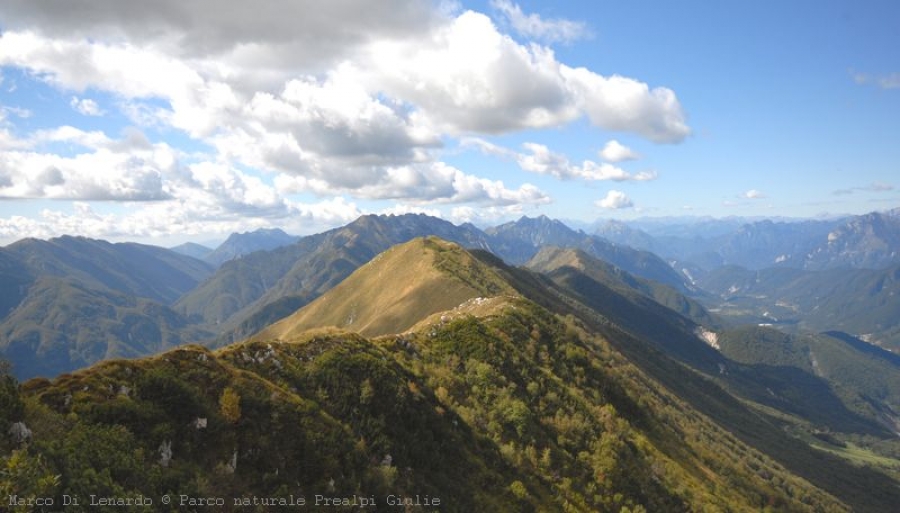 The Prealpi Giulie natural regional park extends across the territory of the villages of Resia, Resiutta, Chiusaforte, Lusevera, Venzone and Moggio Udinese within less than 100 km².
It includes the most elevated parts of the mountain ranges of the Plauris Mountain, Musi Mountains and the Canin Mountain, and slopes of altitude only in correspondence of the fraction of Povici and the Valley of the Mea stream.

These zones have been selected for their geological and natural importance, their landscape and as well the historical and cultural interest. They often present peculiar characters which are hardly founded anywhere else.
This is mostly owed to the fact that the protected area is in the intersection of three biogeographic areas (Alpine, Mediterranean and Illyric) but also to the border of the cultural Latin and Slavic worlds.

A particular specificity is represented in fact from the local communities settled in the Val Resia Valley and in the High Torre Valley have preserved their language and their traditions for centuries and contributed, with their laboriousness, to form the landscape of the territory of the protected area and its bordering zones.
“Stavoli”, “casere”, pathways, footbridges/catwalks, meadows and pastures constitute testimonies of a daily life, which has cohabited with the nature and moulded the territory day by day. Today it can be offered almost intact to the visitors and to the mountain lovers.

An important characteristic of the park is its transboundary vocation, which takes shape in the daily relationship with the Triglav National Park (Slovenia) but also, even if not so intense, with the National Park Nockberge (Austria).

In 2004 a project called ERA - Eco Regio Alpe Adria was launched in cooperation with these two parks. The aim of the project is to develop the cooperation in the sectors of the promotion of local products, of sustainable tourism and environmental education. One focus point is the school exchange project: every year children of local schools visit the other protected areas involved in the project.

To testify the strong connection with the Slovenian Park, the recognition from Europarc for a transboundary protected area arrived in 2009. This area, that includes the territories of the two parks and those of MAB Unesco Julian Alps in Slovenia as well. This area is called Julian Alps Ecoregion.

An ambitious result but also an objective for the future is to look at the progressive strengthening of the relationship among these territories and at the extreme naturalistic importance among the oriental Alps, which isn’t considered by any political and administrative differences, just as already many times wished by Alparc. With the Alparc network a profitable relationship of partnership, that developed collaborations in almost all the subjects but particularly in environmental education and eco-balances, is established. Therefore a special steering group for eco-balances has been created and coordinated by the Park of the Prealpi Giulie in cooperation with the Friulian Dolomites and of the Orobie Valtellinesi .