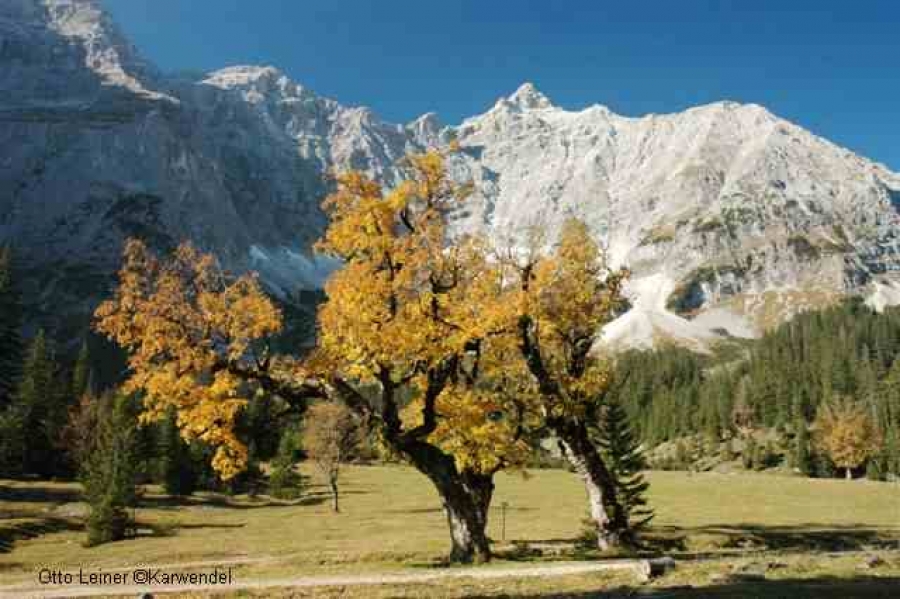 The Alpine Park Karwendel encompasses almost all of the Karwendel range. Extending over 727 km², the park is the largest protected area in the state of Tyrol and Austria's largest nature park. The area’s exceptional conservation value was recognised very early on. Tyrol’s oldest protected area first came into being when the central section of the Karwendel massif was made a conservation area back in 1928. The climate and topography have endowed the Karwendel range with an unusually high number of natural habitats such as ancient woodlands and wild rivers (Isar and Rißbach).

The massif is also home to a wide variety of species. Many typical Alpine flora and fauna are very common here, including golden eagles, sandpipers and German tamarisk (Mycaria germanica). The Karwendel range has been a destination for Alpine tourists for over 130 years and receives around one million visitors every year.

Traditional farming practices – including Alpine dairy farming, forest management and hunting –play a vital role and have been an integral part of the region's identity for centuries.

The role of the park management

The park management body is an essential factor in making formal conservation commitments issues a reality on the ground for regional stakeholder. To this end, the Alpine Park Karwendel Association (Verein Alpenpark Karwendel) was created in January 2008, a body which brings together the federal state of Tyrol, all the relevant local authorities, tourism federations, the Austrian Federal Forests service, chambers of agriculture and the Austrian Alpine Club. The park’s activities focus on:

Interactions between visitors and the park are intended to develop awareness and a love of Nature, thereby ensuring its preservation. Visitors can learn about the Alpine Park Karwendel at the Hinterriß visitor centre and can also take part in a variety of organised activities. Four park rangers are always out and about in the park during the summer with a view to encouraging contact between visitors and locals.

A wide-ranging environmental education programme has been developed as part of the park's natural sciences education activities, with courses lasting anything from half a day to five days. The courses look at key issues in the Karwendel park: biodiversity, water, life in the high mountains, Alpine dairy farming, forest management and more.