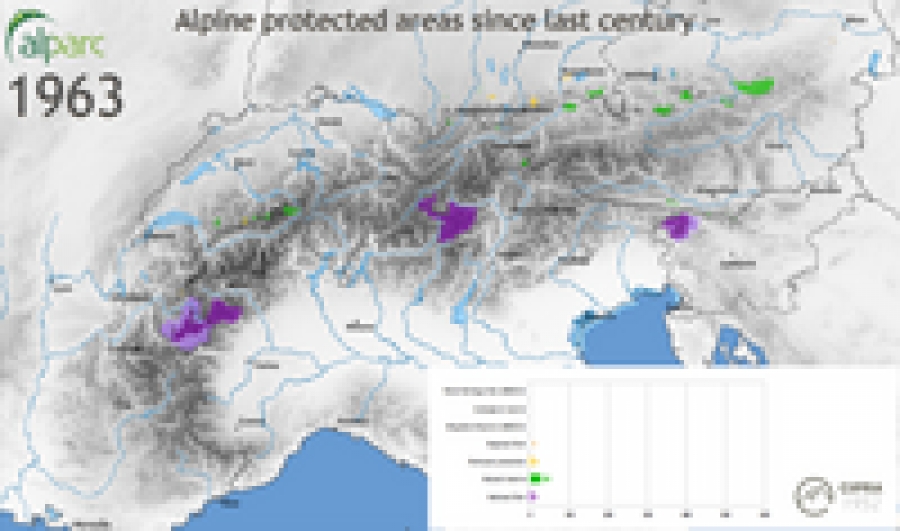 In the year 1914, the first Alpine national park was founded: the Suisse National Park . At the entrance of the valley Engadin, in the canton of Grisons, for almost 10 years the national park was the only protected area in the Alps. Then the National Park Gran Paradiso in Italy and the Triglav National Park in Slovenia followed.
Nature protection became more and more important. Some nature reserves were developed from the year 1925 on (the first one in the Triglav National Park), but the main part of the Alpine protected areas came out after 1952, the year of the foundation of the International Commission for the protection of the Alps (CIPRA).

Within the signing of the Alpine Convention in 1991, 6 Alpine countries, which have signed the convention, have already created 10 national parks, 46 regional nature parks, 235 nature protection areas and 139 special protected areas. Furthermore the UNESCO has recognised 5 protected areas as biosphere reserves.

Nowadays there are around 1000 protected areas (> 100 ha) united in the network ALPARC, in the perimeter of the Alpine Convention and its surroundings.

You can see the animation about the historical development of the Alpine protected areas at this link !

For further information, please look at our webpage (www.alparc.org) or contact us directly by mail: info@alparc.org .