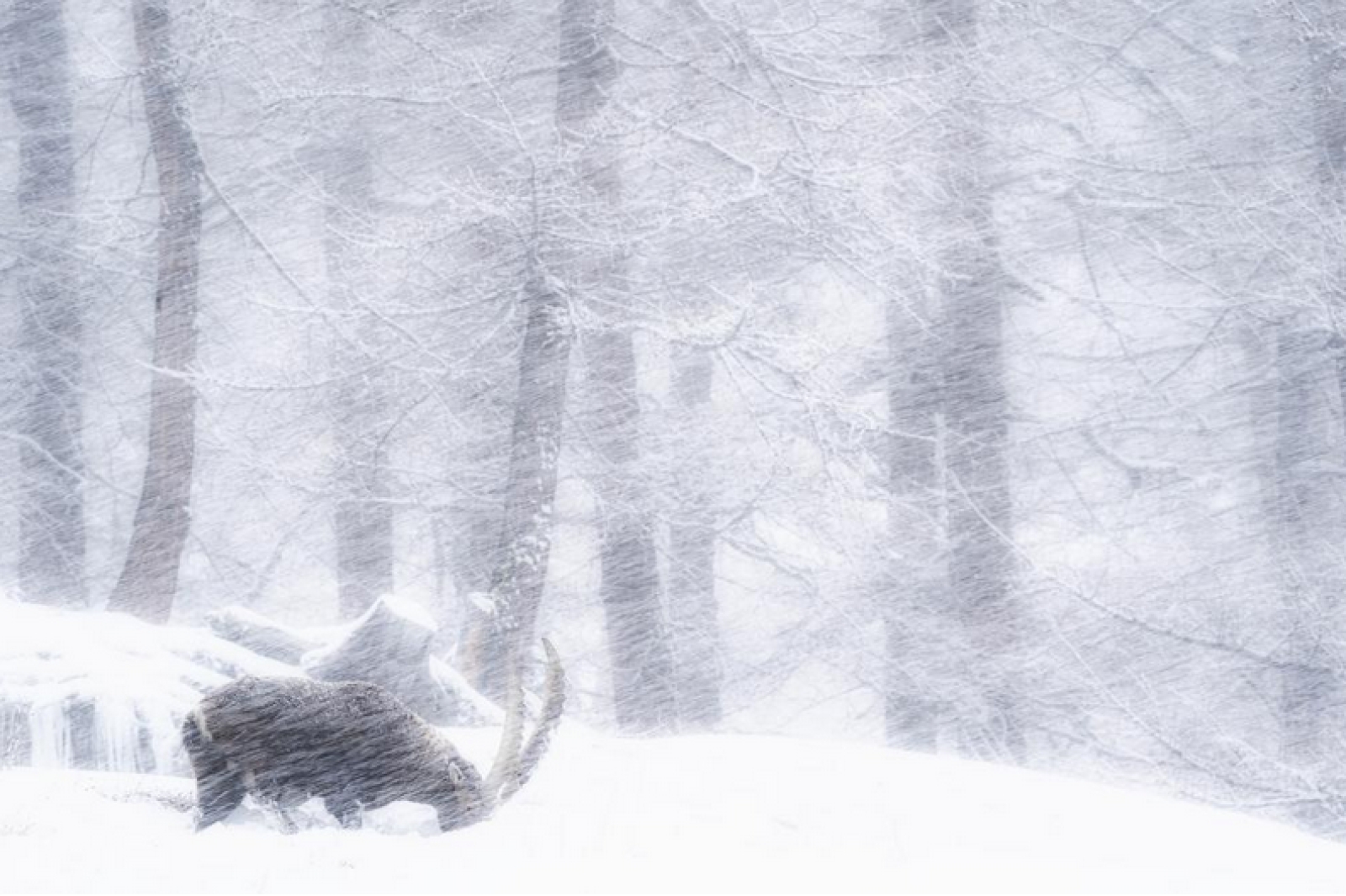 The success of the initiative is confirmed by its numbers: almost 3,500 images have taken part in the 2021 selection.

The 15th edition of the international contest "Fotografare il Parco", organised by the National Parks of Stelvio, Gran Paradiso, Abruzzo, Lazio and Molise, and de la Vanoise, with the patronage of Alparc, Federparchi, and the participation of the media partner La Rivista della Natura, has come to an end. The great participation of photography enthusiasts and the high technical, artistic, and naturalistic value of the images presented, confirmed the important role that "Fotografare il Parco" has taken on in the panorama of photography contests.

The three absolute winners well represent the different approaches and "disciplines" of nature photography. First place went to the highly evocative image of an ibex facing the force of a storm by Stanislao Basileo; second place was taken by Marco Antonini's photo of the "dance of life" of a couple of demoiselle cranes in the delicate moment of egg laying. Third place went to the dramatic black and white, enhanced by the range of chiaroscuros, taken by Véronique Andre's photo showing the effects of a summer snowfall on the steep faces of the Dent Parrachée in the Vanoise massif.

First place in the different categories identified in the contest went to Mirko Zanetti’s “Owl” for the Park’s wildife, Fabrizio Moglia’s “Salmo trutta fario” for the Park’s micro-world and nature details, and photographer Claudia Giusti, “Drops and weaves” for the Park’s plant world.

The special price Interaction between man and environment has been assigned to “Foliage in the Park-Forca d’Acero”, a highly graphic shot in which the continuity of an autumn forest is interrupted by a sinuous strip of asphalt.

The many prizes available proved to be few compared to the number of deserving photos. The jury therefore decided to award 11 more photographs. “Fotografare il Parco” confirmed the high quality of the competing pictures and the participants’ great knowledge of nature. Their origin also confirms the contest success on the international scene: people could say that “Fotografare il Parco” knowns no boundaries, just like the beauty of nature. Fifteen editions of “Fotografare il Parco” for one hundred years of Park. This year marks the centenary of the birth of the first Italian National Parks, the Gran Paradiso and the Park of Abruzzo, Lazio, and Molise.

Italo Cerise, President of the Gran Paradiso National Park remarks "We congratulate the participants and the winners for the high-quality level and the strong emotional charge of the images submitted. In this very important year for us, in which we are celebrating our centenary, we are particularly excited to find in the absolute winning image the animal that symbolises our protected area, the ibex, which advances stubbornly with all its strength. A perfect metaphor for the tenacity with which this species and the Park itself have been facing adversity and challenges for a hundred years".

"Photography has proved to be a wonderful way of approaching nature, enclosing in a single shot - one of the thousands that can be taken today thanks to digital technology - the marvels of the natural heritage that we have been duty-bound to protect for a hundred years for future generations" - says Giovanni Cannata, President of the Abruzzo, Lazio and Molise National Park - When we take photographs, however, we must never lose sight of the main objective: respect for the nature in which we live, because there are often very fragile balances that can be damaged in very little ways. Congratulations to the winners and thanks to the many participants".

“An important birthday for all of us, the centenary of the first Italian national parks," say the spokesmen of the Stelvio and de la Vanoise National Parks. "The award ceremony for the fifteenth edition of the contest will be an opportunity to celebrate together and to celebrate, through the splendid winning images, the beauty of an environmental heritage of the entire community that all the protected areas, more or less young and regardless of national boundaries, have contributed and continue to contribute to preserving and enhancing".

The winning and recommended photographs can be seen at www.fotografarerilparco.it, www.pngp.it, www.parcoabruzzo.it and www.vanoise-parcnational.fr.
The date and location of the award ceremony will be arranged in the coming weeks.